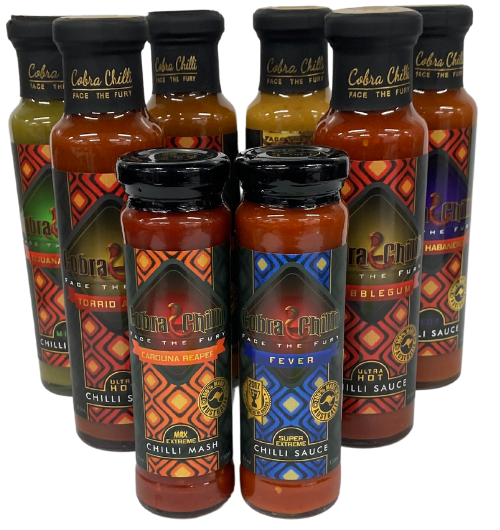 Up For a Challenge?

Up for the ultimate challenge? Try these in this order for the best progression.

This pack includes one of each of the following:

Tijuana Tango
This sauce has a fresh and zesty flavour thanks to the unmistakable, awesome flavour of the world’s most popular chilli – the Jalapeno mixed creatively with Green Tomatoes, Fresh Onion and Garlic.

Blazing Burger Sauce
This Mustard based Burger Sauce is made from our favourite Sauce, Blazing Saddles, plus a few special ingredients, making it such a tasty condiment for burgers, steak sandwiches, sausages & chicken.

Bubblegum Chilli Sauce
The Bubblegum chilli comes in at 850,000 SHUs and was created by Jon Harper. As the “Father” of this variety, and based in the UK, he has been growing this and a lot of other Hybrids for a number of years. Jon called it Bubblegum because he thought it had a taste of Bubblicious Bubblegum, while others say the name is because the chilli has a mixed colour stem and crown that looks like bubblegum.

Fever Chilli Sauce
This all-natural sauce with a beautiful home made chunky consistency delivers a delicious taste and wonderful aroma. It has a very nice upfront flavour from the tomatoes and sugar with a slight hint of garlic and onion. Directly after tasting, the extreme heat of the Carolina Reapers really packs a punch!

Carolina Reaper Chilli Mash
This is for when you want to have fresh chillies on hand to spice up a dish and only add this great chilli flavour and heat.  The Carolina Reaper (HP22B) chilli was ranked as the hottest chilli in the world, according to Guinness World Records in 2013 at an average of 1,569,300 Scoville Heat Units.  Then in early 2018, it was re-tested and re-classified at 1,641,183 – Wow, that’s HOT

* Please note, in the event that any ingredient becomes unavailable we will swap it for a similar item of equal or greater value *

Be the first to review “Up For a Challenge?” Cancel reply