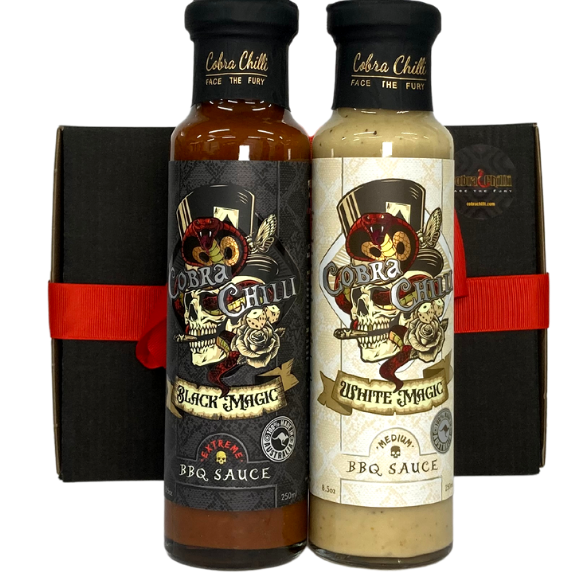 Sometimes the one you care about the most requires a bit of TOUGH LOVE and the Black Magic will certainly get things sorted😂 White is not so tough but OMG the flavours will surprise you!

For your love that loves chilli!  Its the latest and the rarest!

This is the first BBQ Sauce in the world made using the Chocolate Reapers.

This is the only sauce of any kind in the world available with the Chocolate Reaper.

It has a very strong floral aroma is described as fruity, sweet, and slightly smoky, and the intense heat level kicks in shortly after consumption.

We’ve taken this amazing chilli and infused it into our award-winning BBQ sauce with fresh tomato, fresh garlic, fresh onion, molasses and spices for a delicious combination of BBQ flavours with intense heat. Please – proceed with caution on your Steak Sanga and eat responsibly!

Brisket, Smoked Baby Back Ribs, Pulled Pork, anything off the BBQ such as hamburgers, steak sandwiches and meat lovers or BBQ chicken pizza.

Different from any other BBQ sauce, this White Magic BBQ Sauce uses mayo as a base, along with vinegar, sugar and spices. A USA southern favourite!

Alabama White BBQ Sauce was created by Robert Gibson at Big Bob Gibson’s Bar-B-Q in Decatur, Alabama in 1925 for their famous smoked chicken. At Big Bob’s BBQ joint, they dunk smoked chicken into vats of the sauce before serving. The sauce clings to the meat, offering up a tanginess and rich flavour you won’t get with any other BBQ sauce.

Its tangy peppery taste goes well with poultry, pork, seafood, and wild game and is made to dunk, drizzle, and slather all over smoked chicken for a classic Alabama BBQ experience.

The mad saucier here has taken this classic recipe and “Cobrafied” it by tweaking a few ingredients and adding the amazing Yellow Scotch Bonnet Chilli for a little extra smooth punch. Enjoy!

Fried or smoked chicken and turkey, ribs, a tangy vegetable dip or a dressing for coleslaw and taters.