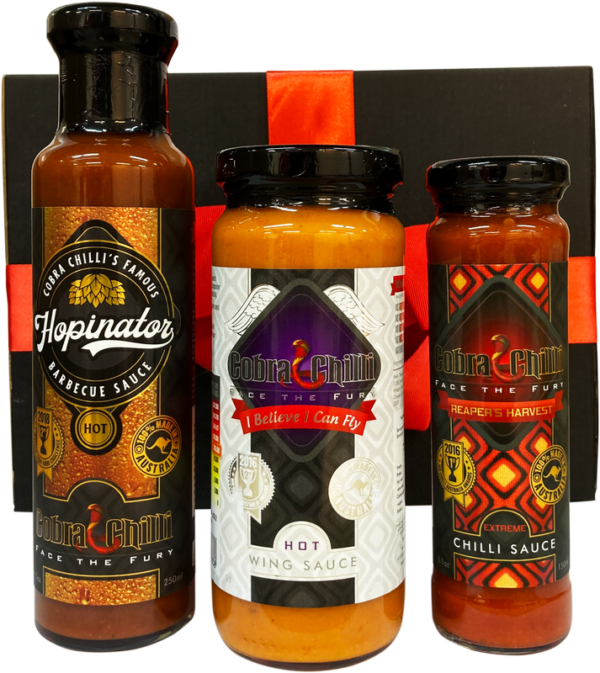 For the chilli connoisseur, here’s a gift box that’ll get the party started with sauces to cook up a storm of SPICY HOT buffalo wings and burgers.

Hopinator Beer BBQ Sauce:
The perfect fusion of four sauces: Ketchup, BBQ, Chilli, and Mustard plus great beer. It’s a COMPLETE Barbecue in a bottle. The genius love child of Sydney Brewery and Cobra Chilli, this sauce is made with fresh tomato, garlic and onion, Cobra Chilli have combined the sweet, smoky flavours of molasses and Worcestershire with the bold and bitter tones of fan-favourite, Potts Point Porter Beer to create a sauce that lets your taste buds know who’s boss.

“I Believe I Can Fly” Wing Sauce
Originating back to 1964 in a Buffalo, New York family-owned restaurant, the first plate of wings was served made with a special sauce and served with celery & blue-cheese because that’s all they had available at the time. The dish became a hit and has been served since all over America and gaining popularity here in Australia. Cobra Chilli has taken this concept and reinvented it into a sauce with the freshest ingredients we can find and flavours that are second to none.

Reapers Harvest Chilli Sauce
The Carolina Reaper (HP22B) chilli was ranked as the hottest chilli in the world, according to Guinness World Records in 2013. Then in early 2018, it was re-tested and re-classified at 1,641,183 – Wow, that’s HOT! Reaper’s Harvest is well rounded with equally matched heat and flavour. The ingredients complement each other nicely and shine through the extreme heat of the Carolina Reapers. This is definitely a sauce for chilliheads who can handle the heat.

* Please note, in the event that any ingredient becomes unavailable we will swap it for a similar item of equal or greater value *