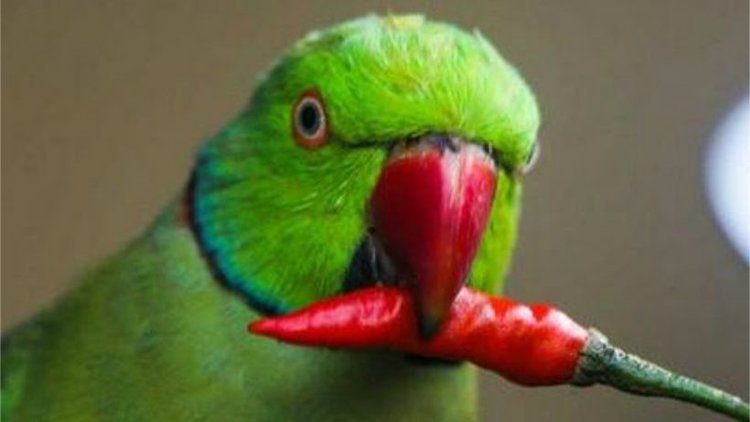 Why Do Birds Eat Chilli’s?

And how in the world can they not fall over dead when they do? Birds are such small creatures, but how they can eat so much incendiary chilli with no harmful effects – I mean, when was the last time you saw a bird flying through the sky breathing fire or carrying a bottle of milk?

So how do they do it? Do birds have cast iron guts or is there some other, strange reason for the culinary tastes of birds?

Are birds immune to hot chillies?

Did you know that some chillies are even called ‘bird peppers’, because they are such a culinary delight to some birds?

Well it just so happens that we mammals have a receptor called the TRPV1 receptor or the capsaicin receptor, the function of which is to detect heat and regulate body temperature. One of the best known activators of this receptor is – you guessed it – capsaicin in chillies and when activated, it creates a painful burning sensation.

Now since birds do not appear to be affected by eating chilli, you might think that they don’t have this receptor, but you would be wrong. Birds, do in fact have the TRPV1 receptor it is just that bird’s version of this receptor is insensitive to capsaicin.

So birds can eat as much chilli as they want, without any adverse effects. That however, raises the question as to why would they want to eat chillies?

Why do birds eat chillies?

Well, this seems to be an evolutionary adaption that helps the dispersal of chilli seeds over wide areas.

It appears that chilli seeds are unaffected by their travel through a birds’ intestines, whereas when eaten by humans, the germination of these seeds is reduced. So birds act like little carry cases for the seeds, dispersing them across large areas. In return, the birds benefit from all the nutrients contained in the chillies and aren’t turned into little tiny flying dragons.

This sort of brings up the chicken and the egg debate – or the bird and the seed conundrum, if you like.  If the intestinal tract of humans and many other mammals reduces the germination of chilli seeds that have been ingested, have the chilli peppers evolved this incendiary effect as a way to prevent us from eating chillies?

At the same time, the birds’ insensitivity to capsaicin gives them a free reign to eat all the chillies they want and to disperse them far and wide. Or on the other hand, have birds adapted to eating capsaicin because they have a fondness for chillies?

If you want to fly like a bird…like I mean seriously fly, try Cobra Chilli’s Wing sauces!

credit to Qld Aviaries for pic.